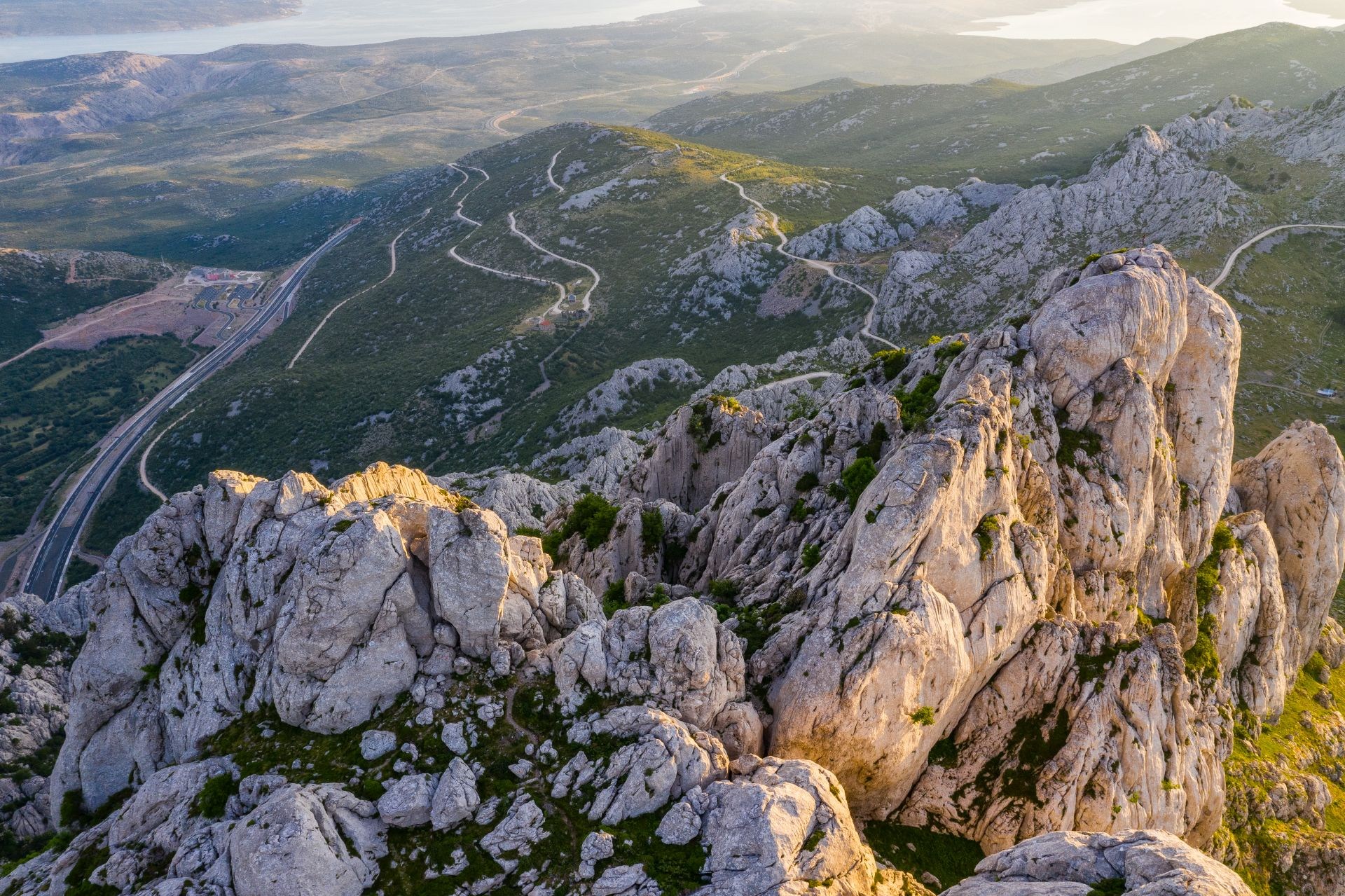 This circular bike trail leads through picturesque villages at the foot of Velebit Mountain, in which dominates traditional stonemade architecture along with many important cultural-historical locations and beautiful views on the mountain and the sea. The trail starts from the centre of Starigrad - Paklenica (1). At the crossroad (2), it’s possible to turn left and visit a unique stone Memorials – MIRILA (A) (Mirila=Funeral stones), that one reaches after a 1 km uphill ride. Main trail leads straight, passing by old wells and gusterna (B) (rain water reservoir), former main sources of drinking water. At Marasovići hamlet we recommend a visit to a recently renovated ethno-house (C) with a small ethnographic collection and traditional Dalmatian tavern.

From here it is possible to visit NP Paklenica (D) or to go head in the other direction towards sea to the most beautiful beach in Starigrad – Kulina. It is known for its Večka kula (E) which by legend keeps the king's Pasoglav secret… Turning right, at the very entrance of NP Paklenica (3) the ride continues along the main path which is on the section Dadići/Škiljići equipped with educational boards that provide a guide to “Short journey through the past” (F).

The pleasant ride passes traditional “dry-stone” walls and old hamlets, with beautiful sea views. There is another charming gusterna (G) above the Jurline hamlet and from Jusupi (4) hamlet it is possible to go down to the centre of Seline and to the local beauty – natural pebble beach Pisak.

At Reljani village one descends to the main road (5) and rides along for 1 km and then turns again to the non paved (6) road reaching a valuable historical site – remains of late-antique Gradina (=hill fort) Modrič (H). Here opens up a magnificent view of the sea and bay cut deeply into land. It is particularly interesting because of wellsprings: freshwater pillars springing through seabed.

After getting down to the centre of Modrič, turning left between the road and dry-stone walls (7), carefully crossing the main road one arrives at a bus station, next to which is situated a fresh potable water possibility, Vrilo Velebit. From this location it is possible to continue the ride taking a route 2 or to get back by the same trail to Starigrad-Paklenica. Unforgettable experience of this unique connection of sea and mountain is completely different and more intense on the way back.

This short, but attractive trail leads through a characteristic landscape of karst terrain, interlaced with low vegetation dominated by stillness and views of various Velebit’s hillsides.
The route starts from the bus station in Modrič (1), next to which, a potable water well named Vrilo Velebit is situated. Cut deep in land, bay Modrič is interesting because of wellsprings phenomenon – freshwater pillars springing through seabed.
After careful crossing of the main road, the trail follows the climb on Put hrvatskih brigada Street to the crossroad (2), where it continues left towards the Kitnasta Glavica village. This trail provides a beautiful view of the sea and the mountain and provides strength for upcoming climb. Once the climb has finished, the trail follows a pleasant ride through a characteristic landscape dominated by rocks (karst terrain) and low vegetation.
At the crossroad (3) turn left to enter the Kitnasta Glavica village. In the village itself, a bike needs to be pushed for some 60m and afterwards the ride continues on a well prepared but non-paved road heading south-east. The calming stillness is occasionally interrupted by shepherds with their sheep herds on the pasture. At the crossroad (5) one crosses ways with trail 3 which leads to the left towards the village Zelenikovac. It continues straight forward and then passes under the power-transmission lines and on the overpass above the highway, takes a right turn at the crossroad (6) and continues to the north side of the big quarry.
On the way back to Modrič the trail passes under the highway (7) and continues on the old main road bordered by traditional curb stones. At the crossroad (8) one can turn left to the centre of Rovanjska, where it’s worth to visit the medieval church architecturally unusual, St George’s (I), located on the waterfront.
In the immediate vicinity of this crossroad there is the Modrič cave (J), a protected geomorphological natural monument. The entrance of the cave is located just above the waterfront, with a view on the ruins of Modrič fort on the other side of the bay. The cave is arranged for organized tourist visits, which we highly recommend to visit while in the area.

The trail leads through a characteristic landscape of sea and mountains and to very attractive historic and nature locations.
It starts from the big crossroad in Maslenica (1) where it turns on to a gravel road. After a pleasant ride through the intact nature it turns left at the crossroad (2) and continues through the quarry to the northwest, enjoying the view of the mountain tops of the Velebit. A double crossroad follows on the main road (3). After the second crossroads, the trail turns right onto a gravel road and continues to the next crossroad (4) where one once again turns right. The ride continues through a rocky landscape with small vegetation.
After passing the highway overpass and under the power transmission lines, the ride heads gently downhill to the crossroad (5) from where it’s possible to go forward to the village of Kitnasta Glavica or just staying on the main road of this route leading towards the village of Zelenikovac. The easy uphill ride is accompanied by a calming silence and a beautiful view of the mountain tops. Occasionally sheep herds on the pasture can join the idyllic site.
Soon after the next right turn at the crossroad (6) the trail reaches a big plateau beneath the village of Zelenikovac. It continues straight ahead shadowing traditional dry stone walls, after which the road descends south to the right.
The road soon turns left (7); following the highway to the underpass (8). After the underpass, the ride continues towards the south. Once it meets the main road (9), a short ride on the right side and carefully crosses the road to reach a junction leading towards the viewpoint Pariževačka glavica (K), which is also where one has the best view on the Zrmanja River canyon.
The main road leads to the right, following the road towards Jasenice. At the crossroad (10) the trail passes on the left on a regional road through the village of Šarlići alongside a peaceful green valley. One can turn right at the crossroad towards the village of Jasenice where we recommend a visit to the St Jerome’s (L) church, entirely built of stone.
After leaving the village of Šarlići, the route continues in the south-west direction towards the Novigrad Sea. A junction at the crossroad (11) leads to the viewpoint (N) from where there is a view of a century old olive groves, the sea and a romantic beach beneath. The main road leads to the right, back to Maslenica to the starting point of this adventure.

This longest and mostly asphalted trail, runs through the fascinating landscape entangled with the playful streams, spectacular canyons, hidden wellsprings, and estuaries of Zrmanja River and its tributaries.
The path starts at the fork on the state road Obrovac - Gračac and the steep, twisty descent to the place called Kaštel Žegarski (1). After 4.5 km (2) it is possible to take a right turn, to an unpaved road towards the village Ravni Golubić. There is a marked hiking path connecting the village and the observation tower (A). From that place an exceptionally beautiful view is reaching
out on the estuary of river Krupa into the river Zrmanja ahead. After 5.8 km (3) there is another right branching of the road. Passing through the macadam road it leads to the place where a magnificent view is reaching out the canyon of river Krupa. By all means we recommend a walk down the hiking path towards the bridge named Kudin most (B).
The main trail continues along the road and after less than one kilometre gets to another observation tower. This location offers an opportunity to see a magnificent estuary of a small river Krnjeza into the river Krupa (4). The path descends further towards the Monastery of Krupa (C) and reaches Kaštel Žegarski. This is the starting position for rafting and kayak tours. From
Kaštel Žegarski one turns right in the Obrovac direction. During this ride one enjoys an unforgettable view of a deeply indented canyon of Zrmanja river and the Velebit ridges. Leaving the village named Bogatnik behind, on the 23.9th km the path branches away and turns right towards the place named Bilišani. After 29.3 km the path continues as asphalt in the direction of
Bilišani and after 1.6 km changes direction, turning to the right. Now a non-paved road again heads towards Muškovci.
This is a great rest and refreshment opportunity. This location offers a stunning walk to the enchanting waterfall by the name of Berberov buk (D). It is possible to visit village Ogare but also an opportunity to dip into the refreshing crystal clear waters of river Zrmanja. The earlier mentioned rafting and kayak tours reach their end at this spot, because from this place forward the flow of river Zrmanja subsequently calms down. Soon afterwards the river finally merges into the sea. The trail between (8) - (9) is not specifically marked and is ridden on the local road. 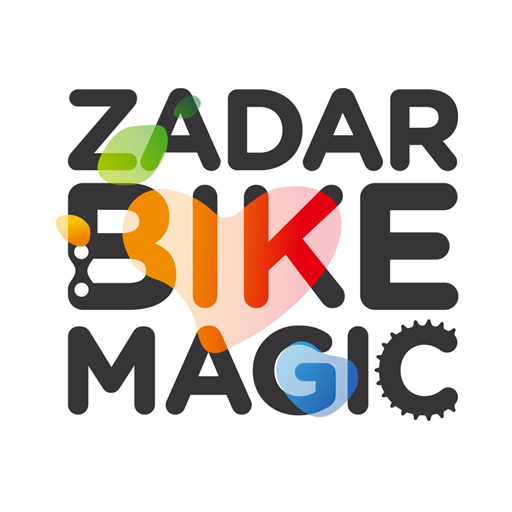